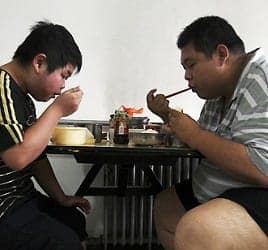 As mentioned in the previous article, a new study published Monday, June 12, 2017 in the New England Journal of Medicine analyzed data from 68.5 million adults and children in 195 countries and found that 1/3 of people worldwide are overweight or obese and are at increased risk of chronic disease and death, as a result.

Data from one country, China, stood out among all of them due to record high rates of childhood and adult obesity;

I wanted to have a look at the Dietary Guidelines for Chinese Residents (Chinese: 中国居民膳食指南) in the years prior to 2015, to determine how they may have contributed to these high rates of overweight and obesity.

The Chinese Dietary Guidelines, known as the ‘Food Guide Pagoda’ was first published in 1989 and revised in 1997. The 2007 revision was developed in conjunction with a committee from the  Chinese Nutrition Society, in association with the Ministry of Health.  A new revision came out in 2016.

The 2007 ‘Food Guide Pagoda’ (the one that was in effect at the time the 2015 overweight and obesity statistics came out) was divided into five levels of recommended consumption corresponding to the five Chinese food groups.

According to the Chinese Dietary Recommendations, the majority of foods in each meal should be made up of cereals, including rice, corn, bread, noodles, crackers and tubers (such as potatoes), followed by Vegetables and Fruit.

The main recommendations of the 2007 Chinese Dietary Guidelines were as follows:

1. Leading cause of death

In 2015, heart disease overtook Chronic Obstructive Pulmonary Disease (COPD) as the second leading cause of death, followed by stroke.

In 1990, the leading cause of death in China was Chronic Obstructive Pulmonary Disease (COPD) largely contributed to by smoking, followed by heart disease and diarrhea.

2. Leading cause of premature death

3. What caused the most death and disability combined?

In 2015, stroke was leading cause of death in China, followed by heart disease.

Magnitude of the Problem – China compared to the US and Canada

Rates of stroke in the China and US were quite similar. Both China and the US had the highest number of obese adults (>35%) in the world.

China concluded that “dietary risks drive the most death and disability” – especially stroke and heart disease which were the two leading causes of all forms of death, of premature death and of disability in 2015.

In response to these high rates of stroke and heart disease among Chinese, the Chinese government, with the assistance of the Chinese Nutrition Society produced a revised version of the Chinese Food Pagoda in 2016. 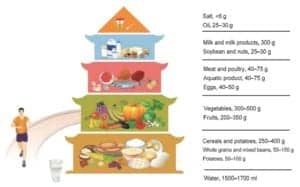 The Chinese have stated that “there have been no significant changes in dietary recommendations” (Wang et al, 2016) when compared with the previous version of the 2007 Food Pagoda and are emphasizing the following recommendations:

Balance eating and exercise to maintain a healthy body weight – this is based on the same “calorie in / calorie out” model that the US and Canadian recommendations have been based on. “Avoiding ingesting excessive food and physical inactivity is the best way to maintain energy balance”.

Consume plenty of vegetables, milk, and soybeans – The daily vegetable intake should be in the range of 300–500 g. Dark vegetables, including spinach, tomato, purple cabbage, pak choy, broccoli, and eggplant, should account for half this amount and should appear in every meal. Fruits should be consumed every day. The daily intake of fresh fruits, excluding fruit juice, should be between 200 and 350 g. A variety of dairy products, equivalent to 300 g of liquid milk, should be consumed per day. Bean products and nuts should be frequently eaten in an appropriate amount for energy and essential oils.

Consume an appropriate amount of fish, poultry, eggs, and lean meat – The consumption of fish, poultry, eggs, and meat should be in moderation. The appropriate weekly intake is set at 280–525 g of fish, 280–525 g of poultry, and 280–350 g of eggs with an accumulated daily intake of 120–200 g on average. Fish and poultry should be chosen preferentially. The yolk should not be discarded when consuming eggs, and less fat and fewer smoked and cured meat products should be eaten.

China now has some of the highest rates of childhood obesity in the world (~10%) and is tied with the US for the highest rate of adult obesity (>35%) yet to address the issue of incredibly high rates of stroke and high rates of heart disease, the 2016 Chinese Dietary Recommendations define a balance diet pattern as a daily adult intake of;

These “new” recommendations seem to be based on the same “calorie in / calorie out” model familiar to us in the West and that fail to take into account how the body compensates on a carbohydrate-based calorie restricted diet diet (see previous blogs).

The Chinese are being told that “the best way to maintain energy balance” (Wang et al, 2016) is to;

Over the last four decades,  Americans and Canadians have reduced their fat consumption from ~40% in the 1970’s to ~30%, increased the amount of carbohydrate as whole grains, fruits and vegetables, are consuming low fat milk, eating more fish and drinking less pop and presently, 2/3 of adults considered overweight or obese.

Should we expect different results in China?

How I can help you

If you are looking to achieve a healthy body weight, lower blood sugar, blood pressure and triglycerides, I can help.

I take a low carb high health fat approach and can teach you how to eat well, without weighing or measuring food, or counting “points”.

Send me a note using the “Contact Us” form, on the tab above.

Copyright ©2017 BetterByDesign Nutrition Ltd.  LEGAL NOTICE: The contents of this blog, including text, images and cited statistics as well as all other material contained here (the “content”) are for information purposes only.  The content is not intended to be a substitute for professional advice, medical diagnosis and/or treatment and is not suitable for self-administration without regular monitoring by a Registered Dietitian and with the knowledge of your physician. Do not disregard medical advice and always consult your physician with any questions you may have regarding a medical condition or before implementing something you have read in our content.