Most people think of pre-diabetes as ‘warning sign’ that they are at risk for developing Type 2 Diabetes, but it is actually the final stage before diagnosis. By the time a person is prediabetic their blood glucose results (also called “blood sugar”) are in the abnormal range on routine tests such as a fasting blood glucose test (FBS) and glycated hemoglobin (HbA1C). They also already have increased rates of high blood pressure, abnormal cholesterol, cardiovascular disease, including heart attack and stroke as well as chronic kidney disease.

It is now known that abnormalities with the hormone insulin — including insulin resistance and hyperinsulinemia appear more than 20 years before a diagnosis of Type 2 Diabetes[1], so prevention of Type 2 Diabetes needs to begin when blood sugar results still appear normal.

Before getting into the technical details of insulin resistance and hyperinsulinemia, I want to explain these concepts in terms that everyone can understand.

***The problem is blood sugar may be within normal range because the pancreas is overworking to keep it low!***

When people have a 2 hour Oral Glucose Test with added insulin assessors (explained below), blood glucose results may come back normal because the person is healthy.

The problem is that blood glucose results may appear normal because the pancreas is working way too hard to keep it that way! That is, using the car example, the tachometer is working very hard, but the car is hardly moving!

Let’s look at this scenario in terms of blood test results;

This would be like the car being started but in “park” in the driveway and the engine turning at 3,000 RPM!  The pancreas is working  way too hard to maintain blood sugar and the person hasn’t even eaten yet!

Say we now give this person 75 g of pure glucose to drink and check what happens to their blood sugar at 30 minutes and/or one hour afterwards.

What we expect a healthy person’s blood sugar to do is to go up in response to taking in the glucose, for the pancreas to release the appropriate amount of insulin which results in the blood sugar going back down to at- or slightly below where it started from. This is the normal, healthy response. 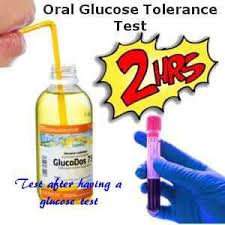 When this person drinks the 75 g of glucose, their pancreas goes into “high rev” and releases a huge amount of insulin—which not only keeps the blood sugar from going up normally in response to taking in glucose, it may result in the blood sugar actually dropping slightly below the fasting level (from 4.9 mmol/L / 88 mg/dl to 4.8 mmol/L / 86 mg/dl). This is not a healthy response but is characteristic of both hyperinsulinemia (too much circulating insulin even when the person is fasting) as well as insulin resistance (cells not responding to insulin’s signal to take up glucose from the blood).

This glucose and insulin response would look as follows;

If this person had only had a standard 2 hour Glucose Tolerance Test, they would be told everything is “fine” because their fasting blood glucose was normal at 4.9 mmol/L / 88 mg/dl and at 2 hours their blood glucose came right back down to normal (4.9 mmol/l / 88 mg/dl)!

Using the car analogy, their “tachometer” (pancreas that produces insulin) is working way too hard in order to keep blood sugar low and without assessing simultaneous glucose AND insulin at fasting, 30 minutes or 1 hour and at 2 hours, the fact this person’s pancreas is working way too hard to keep glucose low would be totally missed. Burnout of the pancreatic β-cells is what results in Type 2 Diabetes (T2D).

By the time a person is diagnosed with T2D, they have lost approximately half of their β-cell mass, so preventing the β-cell’s of the pancreas from being overworked is how to delay or prevent becoming Type 2 Diabetic!

There are four stages in the progression of Type 2 Diabetes, with Insulin Resistance and Hyperinsulinemia being the stage BEFORE pre-diabetes [2].

Insulin resistance and  hyperinsulinemia together are essentially “pre-pre-diabetes”, therefore stopping progression of the disease at this point reduces the risk associated with high blood pressure, abnormal cholesterol, heart attack and stroke, as well as chronic kidney disease.

What is Insulin Resistance and Hyperinsulinemia?

Insulin resistance is where the cells of the body ignore signals from the hormone insulin which tell it to move glucose from broken down from digested food — from the blood and into the cells. When someone is insulin resistant, blood glucose stays higher than it should be, for longer than it should be, which is called  hyperglycemia.  When there are insufficient receptors on muscle cells to move glucose out of the blood after eating, this is called insulin resistance. It isn’t known whether insulin resistance comes first or hyperinsulinemia (high circulating levels of insulin) does. It is believed that it may be different depending on the person[3].

What Can Cause Insulin Resistance & Hyperinsulinemia?

It is known that excessive carbohydrate intake can trigger both high blood sugar levels (hyperglycemia), as well as too much insulin release (hyperinsulinemia).  Eating lots of fruit, for example or foods that contain fructose (fruit sugar) will cause the body to first move the fructose into the body in order to get it to the liver, before it deals with glucose. Since many processed foods contain “high fructose corn syrup” (HFCS), eating these foods contribute to problems with both high blood sugar and high levels of circulating insulin. Eating lots of fruit or drinking fruit juice or smoothies made with lots of fruit can contribute to the same problem. There are other things that can also trigger high blood sugar and high insulin levels besides too much carbohydrate intake, including certain medications like corticosteroids and anti-psychotic medications, and even stress.  Stress causes the hormone cortisol to rise, which is a natural corticosteroid. It is thought that long-term stress may lead to hyperinsulinemia, which increases appetite by affecting something called neuropeptide Y. This may explain why people tend to eat more when they’re stressed and are very often drawn to carbohydrate-based foods that are quickly broken down for energy.

Homeostatic Model Assessment (HOMA-IR) estimates the degree of insulin resistance (IR), β-cell function (the cells of the pancreas that produce insulin) and insulin sensitivity (%S) and is determined from the results simultaneous fasting blood glucose test and a fasting insulin test.

Alternatively, HOMA-IR can be determined from a fasting blood glucose test and a fasting C-peptide test [3]. C-peptide is released in proportion to insulin, so it can be used to estimate insulin. Individual results are best compared to local population cut off values for HOMA1-IR [4] (1985) or the updated HOMA2-IR [5] (1998) .

The original HOMA1-IR equation proposed by Matthews in 1985 [4] was widely used due to its simplicity, however it was not always reliable because it did not consider the variations in the glucose resistance of peripheral tissue and liver, or increases in the insulin secretion curve for blood glucose concentrations above 10 mmol/L (180 mg/dL) or the effect of circulating levels of pro-insulin. [6]. The updated HOMA2-IR computer model [5] has been used since 1998 and corrects for these.

Detection of hyperinsulinemia (high circulating levels of insulin) can occur using an Oral Glucose Sensitivity Index (OGIS) where available, or with a 2-hr Oral Glucose Tolerance Test (2-hr OGTT) with simultaneous assessors of insulin.  These are tests where a fasting person drinks a known amount of glucose (usually 75 g or 100 g of glucose) and their blood sugar and insulin values are measured before the test starts (baseline, while fasting) and at 2 hours. An additional assessor of blood glucose and insulin can be requested at 1 hour which is very helpful for detecting abnormalities that would missed if only assessing at fasting and at 2 hours. In the OGIS, both blood glucose and blood insulin levels are measured at baseline (fasting), at 120 minutes and at 180 minutes[3].

As mentioned at the start of this article, abnormalities in insulin, including insulin resistance and/or hyperinsulinemia begin to occur as much as 20 years before a diagnosis of Type 2 Diabetes — while blood sugar results are still normal. That is when we need to diagnose abnormalities!

If we simply monitor fasting blood glucose, we will miss that someone’s pancreas may be overworking.

Even if we monitor fasting blood glucose and glycated hemoglobin (HbA1C), we can miss that someone’s pancreas is overworking by constantly producing too much insulin.

Furthermore, even if a standard 2 hour Glucose Tolerance Test is run and the person’s fasting blood glucose and 2 hour glucose level after a load is measured, we still can miss that someone’s pancreas is being pushed way too hard if those values appear normal at baseline and at the end of the test.

By running a 2 hour Glucose Tolerance Test with simultaneous glucose and insulin at baseline (fasting), 30 minutes or 1 hour, and at 2 hours we can observe the pancreas being pushed way too hard and implement dietary changes to avoid further β-cell damage or β-cell death.

In British Columbia, the cost of a standard 2 hour Oral Glucose Tolerance Test is $11.82 before tax and $13.36 with HST.

Each additional glucose assessment is $3.48 before tax and $3.93 after tax.

Each insulin assessment costs $32.82 before tax and $37.09 after tax, so a 2 hour Oral Glucose Tolerance Test with additional glucose assessor at 1 hour and 3 insulin assessors at fasting, 1 hour and 2 hour costs as follows;

When there are clinical reasons to suspect that a person may be insulin resistant and/or hyperinsulinemic and assessment of simultaneous glucose and insulin function can provide sufficient motivation for individuals to implement dietary changes that can prevent progression to Type 2 Diabetes, is this testing not worth <$130?

If you would like to know about the services that I offer, please click on the Services tab to learn more and if you have questions related to these, please send me a note using the Contact Me form located on the tab above and I will reply as I am able.