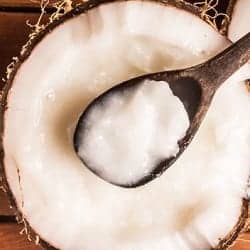 For the second time in the last few days, dire warnings about the dangers of eating certain foods and not eating others dominated the headlines. In a previous post, I addressed the Harvard-based study which claimed that low carb diets shorten lifespan. This post is about a claim made by an adjunct professor from Harvard that ‘coconut oil is pure poison’.

While the coconut oil story only broke this week, the lecture given by Dr. Karin Michels where she issued the dire warning about coconut oil took place on July 10, 2018 and is posted on YouTube in German [1].  In a talk titled “Coconut oil and other nutritional errors”, Dr. Michels, adjunct professor of epidemiology at Harvard T.H. Chan School of Public Health and Director of the Institute for Prevention and Tumor Epidemiology at the University of Freiburg in Germany said;

“I can only warn you urgently about coconut oil. This is one of the worst foods you can eat.”

Michels called the health claims about coconut oil “absolute nonsense” and said it’s “pure poison” for its saturated fat content and its threat to cardiovascular health [2].

For purposes of this article, let’s first look at the (1) health claims surrounding coconut oil and then (2) the belief that saturated fat is a threat to cardiovascular health.

Most of the health claims surrounding coconut oil relate to the fact that it contains Medium Chain Triglycerides or MCTs which are metabolized differently than long chain fatty acids, going directly to the liver rather than requiring to be broken down through digestion.

Half (44 – 52%) of the saturated fat in coconut oil is a specific Medium Chain Triglyceride called lauric acid [3].

The remaining 10% of the fatty acids in coconut oil are unsaturated, mostly oleic acid, with a small amount of linoleic acid [3].

There are studies using 100% medium chain triglycerides that have shown modest weight loss with use of MCT oil compared with olive oil over a 4-month period , however a study comparing coconut oil (~50% MCTs) with soy bean oil (almost all long chain triglycerides) did not have a significant impact on weight loss over a 3-month period [4]. While the actual amount of weight loss with MCT oil may not be substantial, studies seem to indicate that it is “visceral adiposity” or “belly fat” that decreases, lowering waist circumference[4].

(2) Saturated Fat is a Threat to Cardiovascular Health

The basis of the claim by the Harvard adjunct professor that coconut oil is “pure poison” rests with the fact that much of the fat in it is saturated fat and that saturated fat raises total LDL cholesterol, which is associated with heart disease. But is this true?

There are two types of LDL cholesterol; the small, dense LDL which are associated with atherosclerosis and the large, fluffy LDL which are protective against cardiovascular disease [5].

While it used to be believed that total LDL-cholesterol (LDL-C) was a good proxy (indirect substitute) measurement for heart disease risk, we now know that a much more accurate measurement is the LDL-cholesterol particle number (LDL-P) which measures the actual number of LDL particles. This is a much stronger predictor of cardiovascular events than LDL-C [6] because the more particles there are, the more small, dense LDL there are.

Is Higher Saturated Fat in the Diet Associated with Heart Disease?

Recommendations for the continued restriction of dietary fat in the US and Canada is based on the enduring belief that lowering saturated fat in the diet would lower blood cholesterol levels and reduce heart disease.

The question is does it?

A 2018 study published in the journal Nutrients looked at health and nutrition data from 158 countries from 1993-2011 and found that total fat and animal fat consumption were least associated with the risk of cardiovascular disease and that high carbohydrate consumption,  particularly as cereals and wheat was most associated with the risk of cardiovascular disease [9]. Significantly, both of these relationships held up regardless of a nation’s average national income.

These findings support those of the 2017 PURE (Prospective Urban and Rural Epidemiological) study, the largest-ever epidemiological study which recorded dietary intake of 135,000 people in 18 countries over an average of 7 1/2 years, including high-, medium- and low-income nations. The PURE study found an association between raised cholesterol and lower  cardiovascular risk and that “higher carbohydrate intake was associated with higher risk of total mortality”. It also reported that “total fat and individual types of fat were related to lower total mortality (death)” [10].

A recent study published in the American Journal of Clinical Nutrition reports that long-term consumption of the saturated fat found in full-fat dairy products is not associated with an increased risk of cardiovascular disease (atherosclerosis, coronary artery disease, etc.) or other causes of death, and may actually be protective against heart attack and stroke [11].

For the last forty years, Americans and Canadians have diligently reduced their consumption of eggs, full fat cheese, butter and red meat all because they had been told that the saturated fat in these foods would raise their total LDL cholesterol (which it does) and which will predisposed them to heart disease (not necessarily). While we know that eating foods high in saturated fat will raise total LDL levels, total LDL as mentioned above is not a good measure of cardiovascular risk. LDL particle size and ApoB: ApoA are much better predictors.

Another very good estimator of heart disease risk comes from assessing triglyceride (TG):HDL ratio [8]. It is widely accepted from both sides of the saturated fat debate that high levels of TG predispose people to heart disease, especially when associated with low levels of HDL (‘good cholesterol’).

Since (1) excess carbohydrate in the diet contributes to a rise in TG level and (2) the higher the ratio of HDL is to TG, the more protective it is against heart disease, it would logically follow that including some coconut oil in the diet (which contributes to raising HDL) and minimizing excess carbohydrate (especially as refined carbs) in the diet would together have no negative impact on the risk of heart disease and likely have benefit (based on the evidence presented in previous articles).

Adding excess saturated fat – whether as coconut oil or butter in the diet achieves no special benefit but avoiding it does nothing to lower the risk of heart disease risk and may even increase it.

Coconut is not “pure poison” but it isn’t a magic elixir either.  It is a healthy, natural fat rich in saturated fat with a good supply of MCT oils that can be used in moderate portions for cooking and for raising the ‘smoke point’ of butter when used in cooking (keeping butter from burning when heated). It’s time to stop vilifying saturated fat which is based on proxy measurements of total LDL cholesterol and on the assumption that increased total LDL is a predictor of heart disease.  We have much more accurate proxy measures and need to use them.

If you would like some help known which fats you can and should eat and in what amounts based on your existing health conditions and weight management goals, I can help. I provide services via Distance Consultation (Skype, long distance telephone) as well as in-person in my Coquitlam (British Columbia) office.

If you have questions on my services, please send me a note using the Contact Me form located on the tab above and I ‘ll be happy to reply as soon as I’m able.

To our good health!