Most people have heard that a “Mediterranean Diet” is healthy, but what is it?

According to the 2018 Clinical Practice Guidelines from Diabetes Canada;

Countries of the Mediterranean

The “Mediterranean Diet” referred to in the literature and in common speech refers to what was eaten in Southern Italy in the 1960s when Ancel Keys conducted his Six Country Study (1953) and later his Seven Countries Study (1970). These studies allegedly demonstrated that there was an association between dietary fat as a percentage of daily calories and death from degenerative heart disease but as will be elaborated on below, this is largely because some of the data available at the time was ignored by Ancel Keys’.

The definition of a “Mediterranean Diet” according to the Clinical Practice Guidelines is tied to Keys’ definition;

“Ecologic evidence suggesting beneficial health effects of the Mediterranean diet has emerged from the classic studies of
Keys.” [2]

In 1953, Ancel Keys published the results of his “Six Countries Study”[3], where he said that he demonstrated that there was a direct association between dietary fat as a percentage of daily calories and death from degenerative heart disease (see figure below). 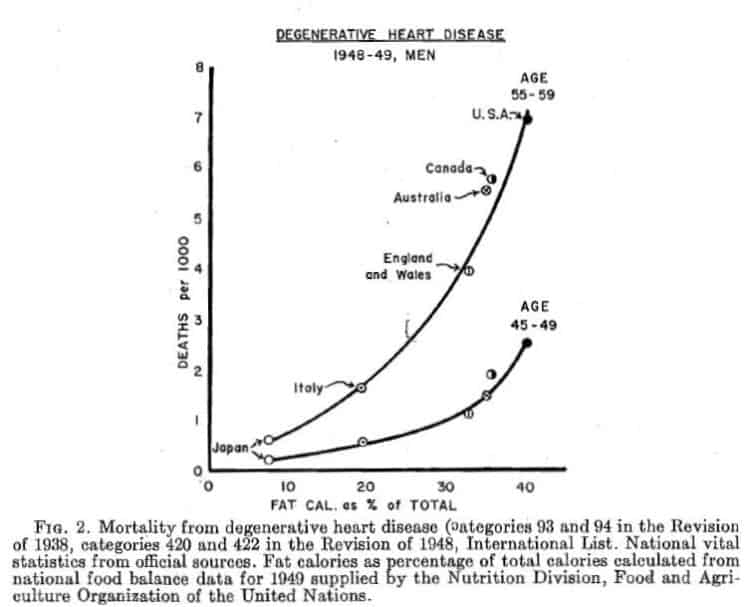 Looking at the diagram from Keys’ study above, it looks like a clear linear relationship however, four years later in 1957 Yerushalamy et al published a paper with data from 22 countries[4], which showed a much weaker relationship between dietary fat and death by coronary heart disease than Keys’s Six Countries Study data [3].

As can be seen from this diagram from the Yerushalamy et al study, no clear linear relationship exists. Data points are quite a bit more scattered; 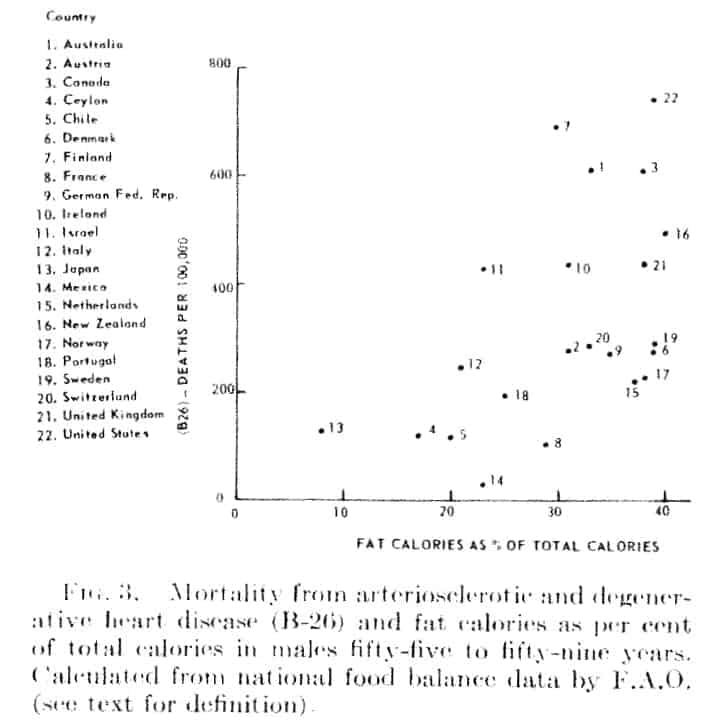 In spite of the publication of Yerushalamy et al’s data in 1957,  in 1970 Keys went on to conduct his Seven Countries Study which he concluded showed an associative relationship between increased dietary saturated fat and coronary heart disease but he failed to include data from countries such as France, in which the relationship did not hold.

The problem is that Keys published his Seven Country Study 32 years after Yerushalamy et al’s 1957 paper which showed a significantly weaker relationship but Key’s (1) failed to mention the Yerushalamy study and  (2) failed to study countries such as France and Spain that had known high intakes of saturated fat, yet low coronary heart disease rates.

France is known for the “French paradox” (a term which came about in the 1980s) because of the country’s relatively low incidence of coronary heart disease (CHD) while having a diet relatively rich in saturated fat. According to a 2004 paper about the French Paradox [6], there was diet and disease data available from the French population that was carried out in 1986–87 and which demonstrated that the saturated fat intake of the French was 15% of the total energy intake, yet such a high consumption of saturated fatty acids was not associated with high coronary heart disease incidence[6]. According to the same paper about the French Paradox, high saturated fat intake combined with low coronary heart disease rates were also observed in other Mediterranean countries such as Spain [6].  Nevertheless, Keys published his 1989 study[5] ignoring the French dietary and disease data that was available 2-3 years earlier (from 1986-1987) [6], as well as ignoring Yerushalamy et al‘s data from 1957. Was this deliberate oversight on Ancel Keys’ part or simply poor research practices?

As a result of Keys omission and the wide publication of his Seven Country Study results, the so-called “Mediterranean Diet” has become synonymous with the diet of Southern Italy in the 1960’s; a diet that is no longer eaten by children and youth there, according to the World Health Organization (WHO):

“In Cyprus, a phenomenal 43% of boys and girls aged nine are either overweight or obese. Greece, Spain and Italy also have rates of over 40%. The Mediterranean countries which gave their name to the famous diet that is supposed to be the healthiest in the world have children with Europe’s biggest weight problem.[7]”

There never really was a “Mediterranean Diet” and the diets of Mediterranean countries in the 1960s varied considerably when it came to intake of red meat, cheese and saturated fat. The so-called “Mediterranean diet” is simply what people in Southern Italy ate in the 1960’s.

That said, for those who are metabolically healthy (that is, not having insulin resistance or Type 2 Diabetes, high blood pressure or high cholesterol) eating what has become known as “the Mediterranean Diet” of whole, plant-based foods including vegetables, legumes, nuts, seeds, modest amounts of whole grains and fruit and moderate-to-high consumption of olive oil, as well as the inclusion of full-fat cheese and meat, fish and poultry is certainly a healthy choice and offers lots of variety!

Even for those that are metabolically compromised (already insulin resistance or have Type 2 Diabetes) the same style of eating can be adapted to limit quickly metabolized carbohydrate, while still enjoying all the other foods that comprise a traditional “Mediterranean Diet”.

Please send me a note using the Contact Me form above and I’ll be happy to reply.